The UK elections are today! Will the Conservative party hold on to power? Will Ed Milliband become the next Prime Minister? Will the Scottish Nationalist Party increase their votes? Here is a short Youtube video that explains the possible outcomes of the election. Subtitles are available.

On this day in 4977 B.C., the universe was created, according to German mathematician and astronomer Johannes Kepler, considered a founder of modern science. Kepler is best known for his theories explaining the motion of planets.

Kepler was born on December 27, 1571, in Germany. At university, he studied the Polish astronomer Nicolaus Copernicus’ theories. Copernicus (1473-1543) believed that the sun, not the earth, was the centre of the solar system. This theory contradicted the traditional view that the sun revolved around the earth.

In 1600, Kepler went to Prague to investigate the orbit of Mars. Over the next decade, Kepler learned about the work of Italian physicist and astronomer Galileo Galilei (1564-1642), who had invented a telescope with which he discovered lunar mountains and craters, the largest four satellites of Jupiter and the phases of Venus, among other things. Kepler corresponded with Galileo and eventually obtained a telescope of his own and improved upon the design.

Kepler’s research was not accepted during his lifetime, but was later a key influence on the English mathematician Sir Isaac Newton (1643-1727) and his law of gravitational force.  He died on November 15, 1630, in Regensberg, Germany. As for Kepler’s calculation about the universe’s birthday, scientists in the 20th century developed the Big Bang theory, which showed that his calculations were incorrect by about 13.7 billion years. 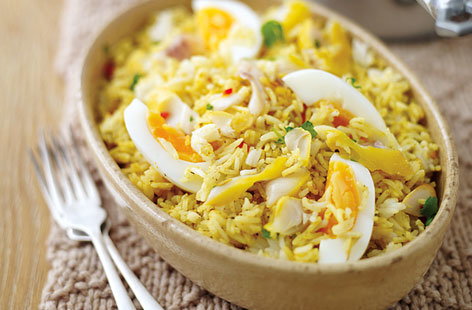 1.   Cook the onion gently in the butter for a few minutes, then add the rice.

2.   Continue cooking gently and stirring, adding the curry powder and nutmeg. After a few minutes, add the milk, cream and 250ml/9fl oz water.

3.   When the mixture begins to simmer, add the fish and continue simmering, stirring occasionally until the rice is cooked. (You may need to add a little water if the mixture becomes dry.)

4.   Season, add the parsley and stir. Add the eggs and garnish with cayenne and nutmeg if using. Serve topped with a knob of butter and wedges of lemon.